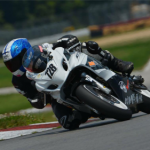 Lake Forest, IL, – Autolite®, an industry leader in spark plug technology, is proud to announce that their sponsored road racing motorcycle team, 419 Racing, will be a wild card entry in the MotoAmerica Championship of Pittsburgh Race. 419 Racing’s rider, Jerry Reeves, will be competing in the Twins class on August 25, 2018, marking both his and the team’s first foray in a professional road race.

The announcement of the bid in this professional motorcycle race comes on the heels of a highly successful 2018 season to date. Reeves – who competes in the WERA North Central Regional series, as well as the WERA National Challenge Series – is currently in 1st place with the most points in several WERA classes.  Most recently, Jerry competed in the AMA Vintage Grand Championships.  It was at this event that he set a new personal best time at Mid-Ohio Sports Car Course, and also won the AMA Vintage National Championship in the Formula 2 class.

All of this positive momentum did not go without notice – it was after the AMA Vintage Motorcycle Days win that he was given the green light to compete in the MotoAmerica race.  The Twins class – a race where Dunlop spec tires are required, and specific engine types are allowed – is new to MotoAmerica, only having been created in 2017. It opened up the series to racers with 2-cylinder motorcycles. “I’ve been racing a twins bike since 2011, it’s what I know, so when MotoAmerica announced the Twins class I had to go for it,” says Jerry Reeves. Also accredited to the successes his team has enjoyed this season are Jerry’s participation in the Endurance race series that he is currently competing in.  This series, which is comprised of three separate long-distance events, has helped him in the sprint events, such as the upcoming Championship of Pittsburgh professional race.

“Having the ability to go out and compete in a 4-hour endurance race lets you try a number of different lines, and adjust as the race and bike conditions change,” says Reeves. “These races are great, they make the shorter sprint races much easier to tackle.”

Using this prior experience and the tide of a competitive season, Jerry and the 419 Racing team feel ready to tackle the MotoAmerica event.  Having recently acquired his professional racing license, Reeves is ready to show the professional racing community his abilities.

Autolite is excited to see the results of 419 Racing’s first event in the professional series, and hope that Jerry’s Autolite Xtreme Sport  Spark Plugs #XS4302 help put him in a competitive position. “We are really excited to see Jerry step up to the MotoAmerica series,” states Jay Buckley, Autolite’s Director of Motorsports and Sponsorships. “He has won multiple championships in WERA with Autolite spark plugs, and now has the chance to step up and show the world the power of Autolite spark plugs!”