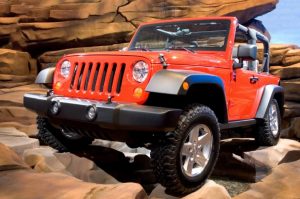 In the last few years, off-roading’s grown in popularity immensely. For the off-roading industry, the largest market is North America, and within this category, the US is ranked first.

Perhaps your friends are into off-roading, and you’ve just gotten into this hobby as well. In fact, you’re enjoying it so much that you want your next car to have off-roading capabilities!

If you’re wondering what the best off-road vehicles to buy in 2020 are, then read on. We’ll give you the inside scoop here.

At first glance, the Toyota Land Cruiser appears to be a luxury SUV. Surely, you can’t get your hands (or in this case, wheels) dirty?

But in fact, you can!

Under its elegant exterior, the Toyota Land Cruiser has 4-wheel drive and a Torsen locking center. The engine is capable of 381 HP and is a 5.7L V8, which means it can handle off-roading pretty well.

Underneath, you’ll find skid plates that protect the entire underside of the vehicle. So if you have any scrapes with the environment, your car will be safe and sound from those abrasions.

For the best off-roading experience, the Land Cruiser has a multi-terrain monitor, a self-leveling suspension, and off-road turn assist. You can also take advantage of crawl control, which is similar to cruise control, but for lower speeds.

For those who like to drive in style but still want to tackle tough trails, the Toyota Land Cruiser may be the optimal vehicle for you.

The Jeep is iconic, so it’s no wonder that it’s made it on this list for the best off-roading vehicles. The Rubicon is a mid-sized pickup truck, so it’s good for people who don’t like to drive massive cars.

It has a 3.6 Pentastar V6 engine that’s capable of 285 HP and maximum torque of 260 lb-ft. In fact, it’s the only Trail Rated pickup truck in all of history. This means it’s able to handle the toughest of terrains; the Rubicon’s handled some difficult terrain to get this accolade.

Features on this off-roading vehicle include front and rear Tru-Lok locks, TrailCam off-road camera, and FOX shocks. It’s also great for towing cargo or hauling it. Be sure to check your local car dealership’s new inventory, as the new 2020 model is very reasonably priced.

The Land Rover is a vehicle that’s been around for over half a century now. However, the Defender has a very modern and contemporary look. Despite that, you can still tell it’s a Land Rover from a mile away.

If you’re set on buying a Land Rover, then you’ll want to get the Defender for off-roading. It’s made of all aluminum, which makes the car not only lightweight, but also strong.

It has amazing torsional rigidity, which makes it significantly stronger than other vehicles. This is thanks to its monocoque construction.

Here’s another pickup truck for the list if you’re looking for one to off-road with.

It has a 6.2L V8 Duramax Turbo diesel engine with a 10-speed automatic transmission. This makes it capable of 420 HP and 460 lb-ft of torque. For those of you who want to tow cargo, you’ll be pleased to know that the Sierra AT4 can tow up to 9,800 pounds.

The off-roading features you’ll get with the GMC Sierra AT4 are added ground clearance and a rear camera mirror. You’ll also get access to the world’s first 6-function GMC MultiPro tailgate.

This vehicle has a strong-looking design, but it’s not so rugged that it could still provide a bit of a feminine touch for female drivers. This makes an excellent pickup truck for both sexes.

Are you a fan of big hulking vehicles? Then you might just love the Nissan Armada. This brute of a car can fit up to 8 people across 3 rows.

The Nissan Armada is perhaps lesser well-known than the other vehicles on this list, but that doesn’t mean its performance is subpar. It actually matches up pretty well with both the Toyota Land Cruiser and the Land Rover Range Rover.

Considering its design is body-on-frame, it’s more traditional than the modern crossover SUVs. However, this is the Nissan Armada’s strong point, considering it can go on trails that crossovers can’t.

Considering it can seat up to 8 people, the Nissan Armada can easily double as a family vehicle. You can kill 2 birds with 1 stone, especially if your spouse has been nagging you to get a new family car recently.

Get the Best Off-Road Vehicles Available

Now you know the best off-road vehicles on the market. The next step is to take a closer look at each one and figure out which one’s best for both your preferences and budget.

Remember: you’re buying a new car to both drive daily and to go off-roading with, so don’t rush it. Take your time to find the off-roading vehicle best for you, and you’ll be glad you did!

For more interesting articles about cars, take a look at our other blog articles now.