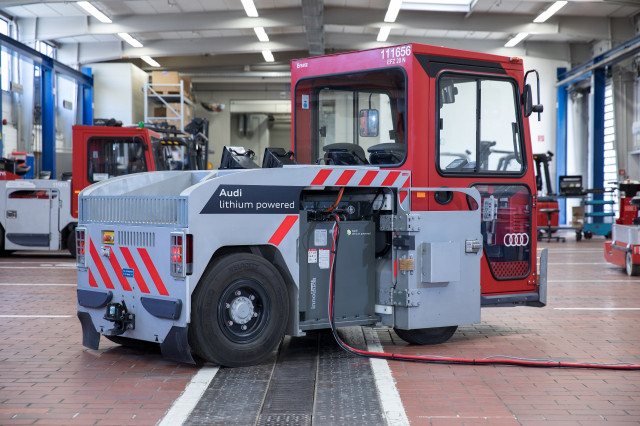 With automakers on the hook in jurisdictions around the world to take back and properly reuse or recycle all the batteries they install in electric cars, various automakers are experimenting with different ways to reuse the depleted batteries that come back from their old electric cars—from using them in new charging stations to selling them to wind farms, to installing them on the roofs of solar-powered apartment complexes.

Now Audi is installing them on fork lifts and the tugs it uses to move parts around its main factory in Ingolstadt, Germany.

The tugs, which resemble larger versions of those that pull baggage trains at airports, are normally equipped with heavy trays of lead-acid batteries, which workers have to remove from the vehicles using heavy equipment several times per day to install on charging stations.

Instead, Audi fits 24 of the e-tron’s 36 battery modules into an identically sized tray to give the tugs and fork lifts up to perhaps between 30 and 50 kwh of battery capacity, depending on how much the cells degraded in their original cars.

With charging hardware like that in a car, the tugs and fork lifts can be driven to a charging station in the factory and plugged in, saving countless man-hours on the factory line and clearing out space that the large, old lead-acid battery chargers consumed.

The new batteries also improve the performance of the machines, allowing them to maintain a constant speed while climbing ramps in the factory, for example.

“Every lithium-ion battery represents high energy consumption and valuable resources that must be used in the best possible way,” said Peter Kössler, Audi board member for Production and Logistics, in a statement. “For us, a sustainable electric-mobility strategy also includes a sensible second-use concept for energy carriers.”

CHECK OUT: Formula E signs on to complete battery recycling

Overall, Audi estimates that reusing e-tron batteries in fork lifts and tugs throughout its 16 factories could save millions of dollars.

Of course, those factories churn out many more EV batteries than the number of such factory vehicles can absorb, so the company may still need to find more ways to reuse old EV batteries before they are recycled.