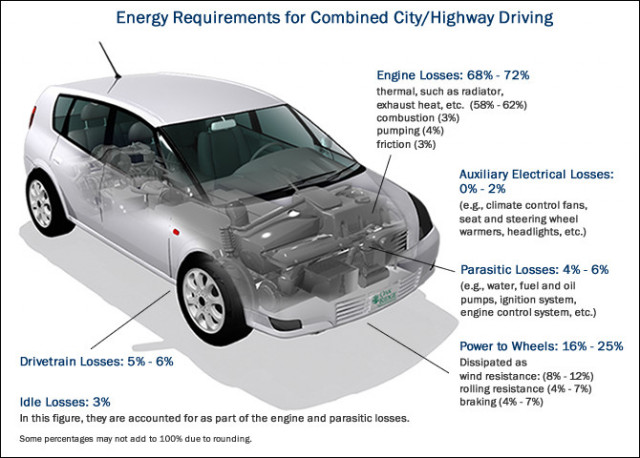 According to the latest Department of Energy “Fact of the Week,” though, their efficiency ranges from a-little-better-than-before to still-abysmal.

This week, the DOE noted that of all the energy splashed into a conventional car’s gas tank, only 12 to 30 percent actually goes to move the car down the road.

Everything else is lost to engine inefficiencies, heat, or used to power accessories, the DOE says.

How much is lost depends partly on the car and partly on the type of driving. Engine losses are higher in the city, while on the highway, cars lose more to tire rolling resistance and aerodynamic drag.

The DOE notes that the figures leave plenty of room for hybrid systems and other advanced engine technologies to improve matters. The factoid did not address the possibility of going all-electric.

An accompanying graphic notes that a gas engine alone loses 68 to 72 percent of the total power in things like friction (3 percent) and pumping losses (4 percent). Heat losses through the radiator and the tailpipe add up to 58 to 62 percent of the total losses while driving a gasoline-powered car. Another 4 to 6 percent is lost to parasitic engine loads such as water, fuel, and oil pumps. And 5 to 6 percent is lost to friction, lash, and other losses in the drivetrain.

CHECK OUT: Five Things To Know About Gas Mileage That Will Save You Money

Auxiliary electrical systems may use no energy if the driver has the (crank) windows down on a nice day without using the climate control, headlights, or stereo. On a rainy or snowy night, with the radio on to monitor the weather and the wipers presumably cranked up to max, and seat and steering-wheel heaters running, these systems could consume 2 percent of the car’s total energy.

In a surprising milestone of progress, the DOE notes only 3 percent of energy is lost to idling. This could be from an increase in hybrids and stop-start systems.

Eventually, the remaining power delivered to the wheels is used to dissipate wind (8 to 12 percent), or overcome rolling resistance at the tires (4 to 7 percent.) Another 4 to 7 percent gets lost to braking, one of the few measures drivers can control.

The analysis drives home the difference that driving on electricity can make.