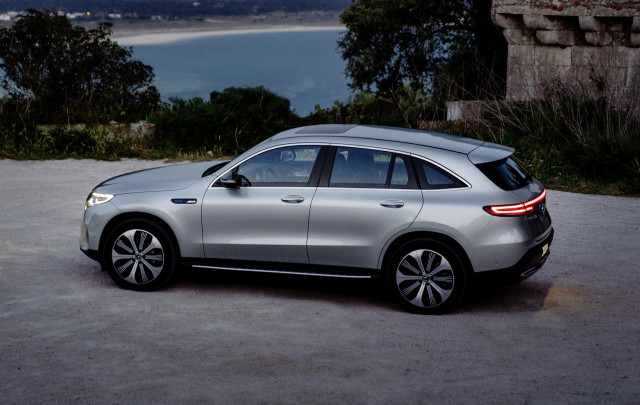 German automakers have all said they will go all-in on electric cars, Yet so far, few have actually arrived, with the Audi E-tron trickling into a few U.S. dealerships last week.

Now Mercedes-Benz has announced that it produced its first new electric EQC SUV on Monday at its factory in Bremen, Germany. The car will go on sale in Europe, but is not expected to come to the U.S. until next year.

We’re headed out to sample the EQC from behind the wheel and will update readers as soon as we’ve had a chance to gather first impressions.

In the meantime, Mercedes says the EQC’s 80 kilowatt-hour battery will give it a range of 280 miles on the old, and very optimistic, New European Drive Cycle tests. That could equate to little more than 200 miles in the U.S., though Mercedes has said it will have as much as 279 miles of range when it goes on sale here.

The EQC’s main competitor, the 2019 Audi E-tron quattro, which just went on sale, has only a 204-mile EPA range rating.

Mercedes announced European pricing, with a “base version” that starts at 71,281 euros, or just short of $80,000. That makes it slightly less expensive than the E-tron quattro in Europe.

Mercedes says the EQC will get between 3 and 3.3 miles per kilowatt-hour.

The EQC is based on Mercedes’ GLC SUV and expected to go into production in the U.S. at Mercedes’s Tuscaloosa, Alabama, factory late this year, with batteries produced at another plant near the factory.