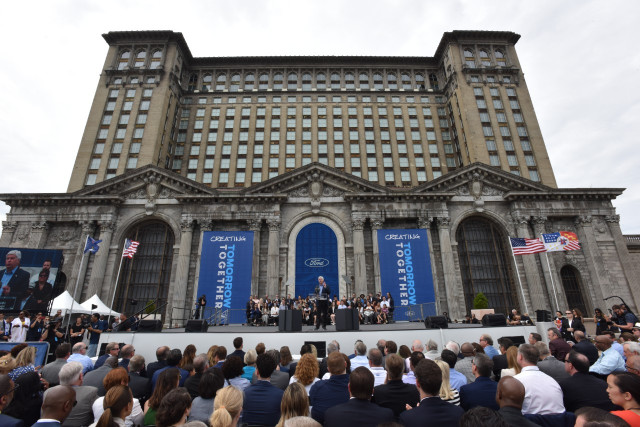 Ford recently made news when it purchased the defunct Michigan Central Station. Closed in 1988, the former Amtrak hub is now going to be turned into a tech center for the Blue Oval brand. Now Ford has revealed it will shell out hundreds of millions of dollars to get the old building into shape.

According to a Tuesday report from Reuters, Ford is earmarking $740 million to rehab the train station and acquire other buildings and rehab them as well. A total of 45 acres of vacant land will be utilized for the project. The idea behind Ford’s acquisition of this train station is to turn it into a home base for future mobility projects, including self-driving cars. By 2022, Ford says it will have 2,500 employees working there. Eventually, Ford hopes to employ up to 5,000 at the site.

Ford isn’t looking to go it alone, though, as the automaker is seeking $250 million in tax and other incentives from federal, state, and local development groups to help develop the Corktown site.

Michigan Central Station has been around since 1914, so it’s certainly part of Detroit’s history. In fact, it was added to the National Register of Historic Places in 1975. Despite that fact, demolition work and numerous acts of vandalism have left the building in a state of disarray.

Before its demise, the station served as a wonderful example of Beaux-Arts architecture, which is a French style of building that features iron and glass, as well as majestic columns, flat roofs, and bold sculptural decorations.

Once finished, the Michigan Central Station facility will increase Ford’s campus footprint in the Detroit area. It’s Dearborn headquarters is about ten miles from Detroit, but this new facility will bring the automaker back to the city’s confines.

Slated to be torn down back in 2009, it’s great to see that the station avoided that fate and will now live on thanks to Ford’s efforts (and cash). We can only hope the company’s cars see a similar revival.