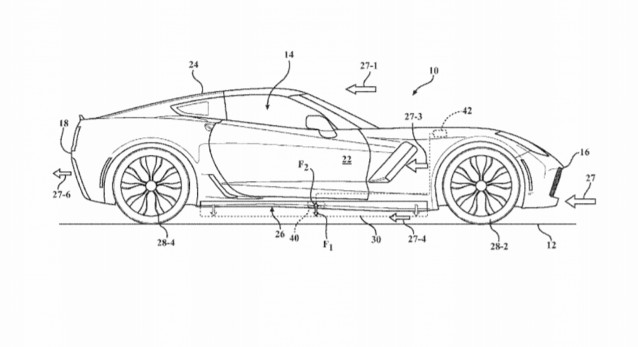 Patent for Active Side Skirts filed by General Motors

The three patent applications were all filed as part of Chevrolet’s design for the new eighth-generation Corvette, but they could make their way to other GM cars and trucks.

Electric cars could be among the biggest beneficiaries of the technologies, since aerodynamics can have a significant effect on range, which becomes a big selling point for electric cars.

The three new technologies are active side skirts, an active rear spoiler, and active front ducts that generate downforce.

Of the three, active side skirts are most likely to appear on future green cars.

Side skirts stretch between the front and rear wheels on the sides of the car below the doors. They channel air away from the spinning rear wheels which create large amounts of drag. 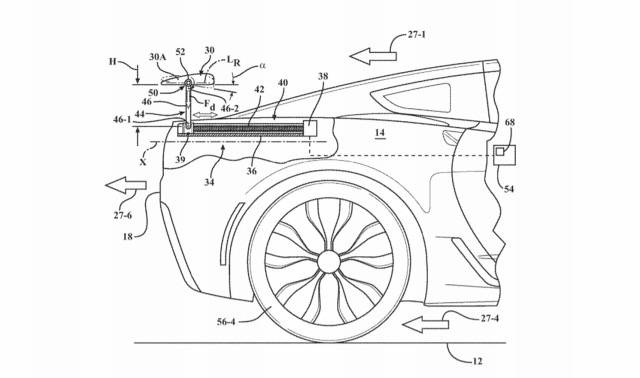 The active side skirts in GM’s patent application (PDF) can extend down toward the road at high speeds when aerodynamic drag is more of an issue, and retract at lower speeds where the car is more likely to encounter dips, bumps, and driveway curb cuts where longer fixed skirts might scrape. On the Corvette, at least, the computer controller is also designed to sense the car’s ride height and adjust the skirts accordingly. Maybe GM is taking a lesson from Tesla with its adjustable ride height on the highway.

The patent application for the rear spoiler (PDF) shows several versions of the technology, with one deploying from the back of the roof of the car. Other drawings show a rear wing sitting on adjustable stanchions that can deploy from the rear fenders.

The application depicts systems that can vary the rear wing’s angle of attack, its height and its fore-aft position. Taller rear wings with more aggressive attack angles can create downforce at the back of the car, which helps high-speed handling, but increases drag. Lower spoilers and those that extend farther back can reduce drag by delaying the separation of airflow at the rear of the car. 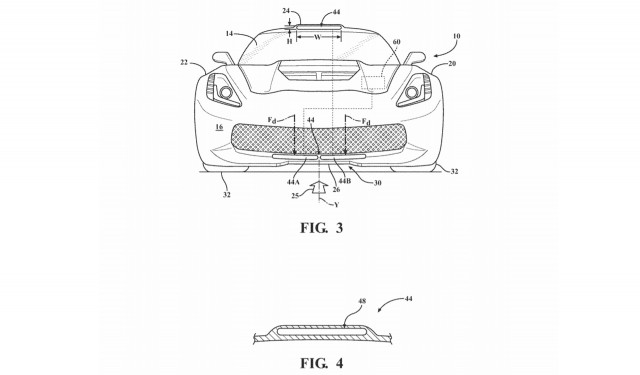 The third patent application, for adjustable downforce vents at the front of the car and on the roof, seems designed more to improve performance on a car like the Corvette than to boost ultimate efficiency.

Automakers have found aerodynamics to be a key method to improve fuel efficiency and meet tightening fuel economy standards.

Active grille shutters have become commonplace on modern cars, and under current fuel economy regulations, automakers receive significant credits for including active grille shutters, which close at high speeds to direct air over the hood of the car and open at low speeds if the engine is warm to allow more air to reach the radiator.