Atlanta is the capital city of the US state of Georgia. The population in 2018 was just under 500k, which ranks it at #37 in the US.  The city has a long and fascinating history, with plenty of cultural attractions to keep visitors interested. It’s also attracting millennials, as it boasts a low cost of living compared to many other US cities, and the commutes are not too bad. But how does Atlanta rate if you are a driver? Let’s find out. 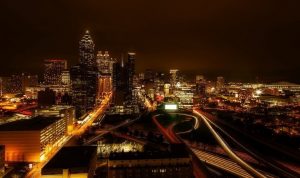 Despite its many attractions, Atlanta isn’t the best place to live and work if you are a driver. A 2016 study carried out by NerdWallet found that Atlanta was the seventh most dangerous city for drivers. Only Detroit, Baton Rouge, Baltimore, Springfield, San Bernardino, and New Orleans came out worse.

The data looked at the number of fatal accidents, vehicle-related crimes, and auto crashes. It revealed that for every 100,000 Atlanta residents, there were 10.7 fatal accidents. Detroit, which was top of the list, logged 16.2 fatalities. Atlanta didn’t fare too well on vehicle theft and other car-crimes either.

Why is Atlanta Dangerous for Drivers?

It should come as no surprise to learn that larger cities are more dangerous for drivers. By virtue of the sheer volume of traffic, especially during rush hour, drivers are more likely to be exposed to risky driving conditions, poor driving from other road users, and other dangerous situations. Crime rates are also higher in large cities, so drivers are more at risk of car-jacking and other vehicular crimes.

It’s Getting More Dangerous for Drivers in Atlanta

Some of the most dangerous roads in and around Atlanta include Campbellton Rd, I-85, I-285, the Fulton Industrial Boulevard, and Camp Creek Parkway. In 2017, there were eight fatalities on the Campbellton Road and another eight on I-85.

The rise of technology has also played a part in Atlanta’s sobering accident statistics. Thanks to the prevalence of smartphones, adults and teens are very likely to be distracted when driving. It’s not safe and it’s not legal, but people still read and send text messages, check their social media feeds, and more while driving.

Serious car accidents in Atlanta can quite literally tear lives apart. If a loved one is involved in a road traffic accident while they were on their way to work, they could end up with serious injuries and huge medical bills. Sure, the insurance might cover the costs, but what happens if they are permanently disabled because another driver ran a red light and failed to stop?

If you or a loved one are involved in a road traffic accident in Atlanta (or anywhere else), speak to an experienced car accident attorney. It won’t make things right, but you can at least minimize your financial losses, which can be huge in the wake of a serious accident.