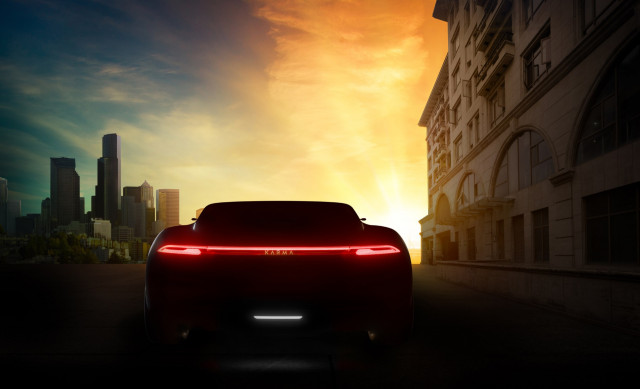 Karma, the company that started as the new maker of the Fisker plug-in hybrid (and once Tesla-fighter) of the same name—now called Revero—plans a new birth, four years after buying the company out of bankruptcy.

At next month’s Shanghai auto show, the company plans a product revival led by three cars: an updated Revero, a new model, designed in partnership with Italian design house Pininfarina, and an all-new concept model it’s calling the Vision.

READ THIS: Pininfarina’s Italian design may be good Karma for plug-in carmaker

The Revero, which has been spotted testing around the U.S. by spy photographers and amateur car-spotters alike, will be a relatively minor update to the company’s current product, the Revero, which is essentially the same car as the Fisker Karma, the car built by the company’s original namesake, Henrik Fisker. That car had a 40-mile electric range, which is likely to grow significantly with new technology, and a turbocharged 4-cylinder range extender engine from GM. The updated model will go on sale in 2019, Karma says.

Karma announced in January that it is working with Pininfarina on a new, as-yet-unnamed model, which sounds likely to be an SUV, perhaps also with plug-in hybrid power.

The company said the Vision will be an all-electric model. In the January announcement, Karma said it was working with Pininfarina on “future models,” so the Vision may also be designed by Pininfarina, although Karma also operates its own “Innovation and Customization” center in southern California.

Zhou revealed tantalizingly little detail about the company’s new product direction. He said, “Karma is a luxury automaker but we are not just a luxury automaker.” The trio of new products, he said, “represents our transformation from an old-value car manufacturer to a company building long-term value in part by becoming an open-platform luxury high-tech automotive incubator.”

Chinese auto parts supplier Wangxiang bought Fisker’s assets in 2014 and formed the new company into Karma, which now employs 1,000 people. Karma says it has 18 dealers in the U.S., Canada, and Chile.