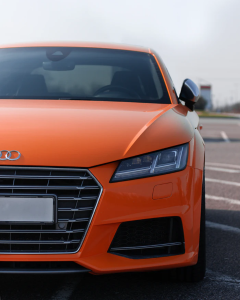 There are many reasons to tint your car windows. Window tinting allows the driver and passengers to be able to see outside the vehicle without others being able to look inside. That way, if you decide to keep valuables within your car, you won’t have to cover them with anything as they won’t be seen. Another reason is that tinting stops the glare from the sun, which helps you see and drive better.

There are more reasons to tint your windows, but there are laws to the percentage of how tinted it can be.

Read on below to find out more about the percentage laws.

The front windshield is most restricted

The small issue with tinting is that since it blocks the sight from outside to the inside, it has to, to some degree, block some from the inside out. Therefore, the front windshield is the most restricted as that is the place where you look out from while driving. It might not be an issue in the morning, but as the sun sets, it gets harder and harder to see.

Some states allow more tinting than others

Since each state carries its own set of motor laws and regulations, the same goes for tinting as well. Each state has a percentage of window tinting allowed, yet some states do not allow it at all. Usually, the tint percentages by state will differ within the same state as some will allow tinting the side windows but not the windshield for instance. For example, Arizona allows for 33% tinting for the front side windows and any percentage of tinting for the backside windows.

Before you check the tinting percentage and place dark film on your windows, you need to check if your specific type of vehicle falls under the same percentage. Some states allow for there to be a higher percentage of tinting on sedans rather than on SUVs or trucks.

There is terminology you need to understand before tinting

There is a specific terminology that you need to know before you tint your windows. The most common one used is VLT%. That stands for “Visible Light Transmission Percentage”. That measurement basically tells you how to assess the tints themselves. Film VLT% tells you the visible light that can get through the film, and net VLT% tells you the visible light that can go through the window and the film. If you have a lower percentage that means a lower percentage of visible light, meaning a darker tint.

Before you install the film on your windows, the first thing you need to research is the laws and regulations for it in your region. After you have that down and know specifically how much is allowed for your type of vehicle, you need to also understand the risks. Getting a tint does allow for some vision disturbance, so make sure you will be able to see through tint clearly so that you can drive safely without any barriers to your sight.