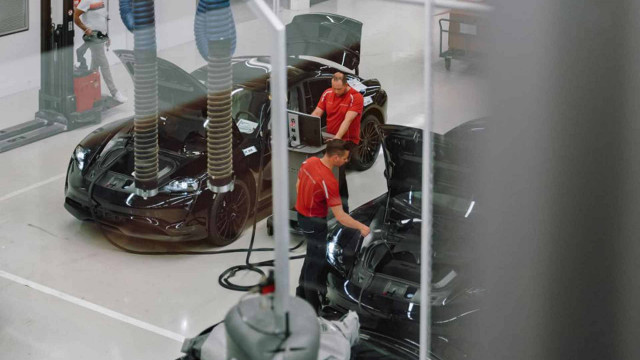 Porsche teases the Taycan electric car’s specifications. Faraday Future builds its first production car body. Toyota’s Project Portal 2.0 fuel-cell semitruck heads to Los Angeles. And the results are in from our latest Twitter poll. All of this and more on Green Car Reports.

The Porsche Taycan will boast 600 horsepower and more than 310 miles of range. The German automaker announced a few more of the electric car’s specifications ahead of its debut next year.

Embattled electric-car maker Faraday Future reached a milestone and produced the first production FF91 body. The company says it will deliver the electric car as soon as December.

The Toyota Project Portal fuel-cell semi truck is heading into a beta phase. After 10,000 miles of zero-emissions driving, a second “Project Beta” fuel-cell semi will enter testing with a greater practicality and driving range.

We asked what readers wish their electric car could do but doesn’t, and the results are in from our latest Twitter poll.

Finally, Ford may have a smaller pickup truck in the works for North America to slot below the mid-size Ranger.