At SEMA, it is never unusual to see some very familiar faces whether it be from your favorite television show to your favorite vehicle.  This year, we were able to get some pictures of not only the rides and models, but also some of the celebrities that attended! 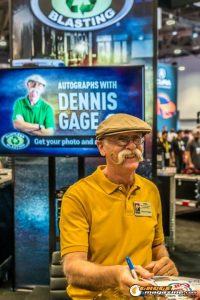 Dennis Gage is the host of “My Classic Car,” which has been running on television since 1997, almost 21 years!  He is known for his catchphrase “honor the timeless classics,” which shows his love for classic cars! Dennis Gage travels all across North America to visit auto shows and events, checking out everything from muscle cars to special museum pieces.

Dennis is also well known for his handlebar mustache, who could not love that! Dennis Gage also came out to our car show, Slamology.  You can check out that coverage below! 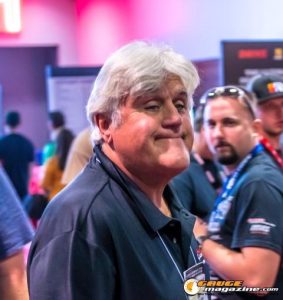 Jay Leno is well known for his American late-night television show, The Jay Leno Show.  After retiring in 2014, he started a TV show for one of his favorite passions, collecting cars.  “Jay Leno’s Garage,” shows Jay Leno searching for unique rides and the amazing stories behind them.  He explores different aspects of each ride, testing supercars, and checking out the latest innovations which is a great reason he was at SEMA 2018.  Jay Leno has stated before that he looks at cars as art that is “rolling down the highway.” 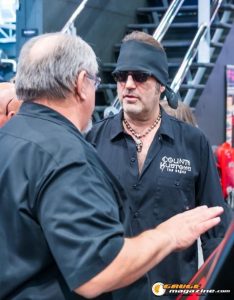 Danny Koker was also in attendance at SEMA 2018 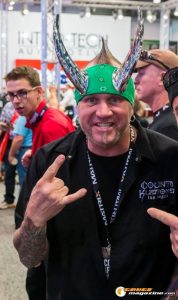 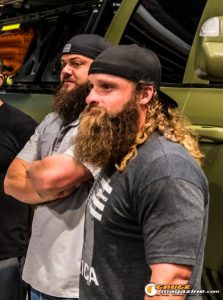 Both Heavy D and Diesel Dave made it out and were seen in the Hornblasters booth!

Diesel Brothers Heavy D and Diesel Dave were seen out in the HornBlasters booth!  Diesel Brothers is a TV Show where Diesel Dave and Heavy D along with their crew work hard and play even harder as they work on diesel lovers truck who are looking for custom builds, crazy stunts, pranks, and hilarious antics! 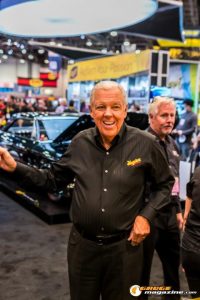 Barry Meguiar is very famously known for his car care products, Meguiar’s.  Meguiars passion for car care comes from research, development, and the manufacturing of high quality leading products!  Barry was also the former host of Car Crazy.  Car Crazy should Barry travelling across the country and the world meeting people who share the love for the automotive field.  Although the show does continue on, Barry is no longer the host. 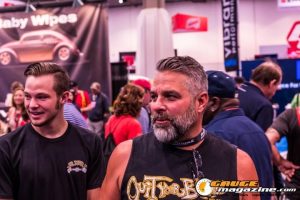 Steve Darnell from Vegas Rat Rods came by and signed autographs along with taking pictures with his friend.  Steve’s show Vegas Rat Rods works with his crew from Welder Up create one-of-a-kind, Max Max-style rat rods.  The team completely uses their imaginations and create a completely unique ride that fits each owner. 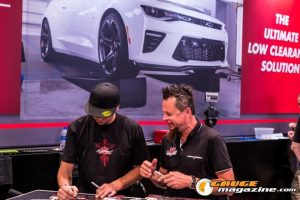 Dave Kindig and his team are feature on TV Show Bitchin Rides.  Bitchin Rides shows the team as they go through the process of restoring and rebuilding vehicles for customers.  The team always seems to surprise their fans with each ride! 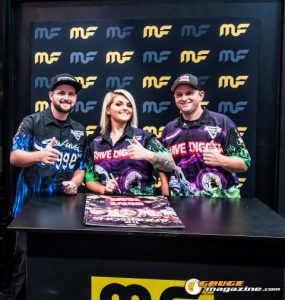 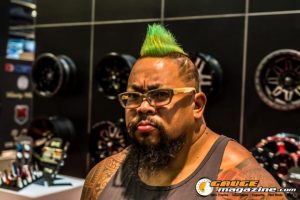 Abe Ulbado, AKA Big Abe, has been in many films.  Mostly known for his role in Lumpia 2.  Big Abe is also known for hanging a tire around his neck and his very muscular frame. This year you would have been able to see Big Abe lugging a huge wheel around his neck with a thick chain.  Who all do you know that can do that?! What an exciting sight! Chip Foose at SEMA 2018!

More than just the star of the TV series Overhaulin’ Chip Foose is one of the biggest people in the automotive field.  Foose Wheels, Foose Art, Foose Vehicle Projects, this man is a master of almost all things.  His Artwork is of another level, looking nothing less than realistic and his projects are always perfection.  How could anyone not be a huge fan of this man?!?

Wanting to see Celebrities from previous years of SEMA?  Check it out now!

Looking for more information on SEMA 2018?  Check out their website with information for next years show!