Last year employee parking lots overflowed at Tesla’s Fremont, California, plant. By comparing the headcount of Tesla’s factory at present versus historically, it’s easy to grasp why the facility has seemed so crowded.

At its heyday, Toyota and GM needed 4,400 people at Fremont. Tesla has an on-site workforce estimated to be 10,000—including some administrative staff, according to Tesla—although that’s for a pace of maybe 250,000 cars annually (versus Toyota and GM’s 450,000 vehicles).

Even at that, not every Model 3 is assembled under the roof of the assembly plant. In June, Tesla set up a third assembly line for Model 3 final assembly, outside (under a tent) in an adjacent parking lot.

One of the most surprising findings by a teardown analysis earlier this year by the consulting firm Munro & Associates—and the reason for Green Car Reports to check back regarding the firm’s conclusions—was that the Model 3’s core body structure, which requires many individual weld points and rivets, didn’t appear to be designed for what the Tesla chief executive officer had described in October 2016 as an “alien dreadnought” of automation that would signal the factory was ready for mass production.

Tesla’s attitude toward assembly automation changed abruptly this spring. Following seasons of mishaps and “production hell”—outlined in calls with financial analysts and over Twitter, during which not enough automation was up and running yet—Tesla CEO Elon Musk conceded that too much automation was slowing production. 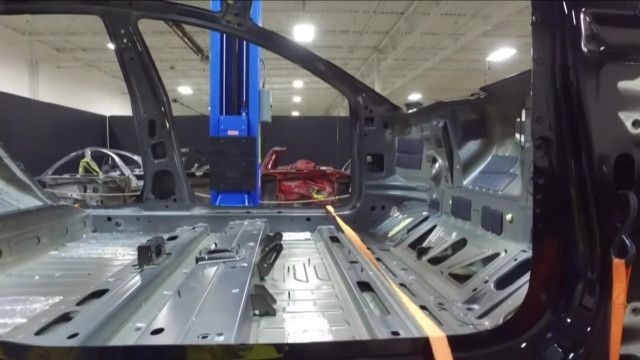 After the 6,600-hour teardown, it became more apparent what was happening. Munro pointed out a technology edge forfeited to serious issues with quality and manufacturing consistency. According to Bloomberg, Munro’s chief executive officer, Sandy Munro, sent Tesla a list of 227 possible improvements, pro bono.

The complexity of the body is one point illustrating that. The Model 3’s rear wheel well, for instance, has nine pieces of sheet metal that are riveted, sealed, or welded together, according to Munro, while the Chevrolet Bolt EV has just one stamped piece.

In May, Musk responded via Twitter that “on the higher body/chassis weight front, [Munro] wasn’t fully appreciating that we were going for much higher crash safety levels than other cars.”

Dreadnought or not, the deeper point the teardown may end up making is the viability of the Model 3 in turning a profit. Munro has pointed to two reasons why Tesla is having such manufacturing hurdles. He summed it up to GCR: “One, they didn’t hire a good body design engineering team, and, two, they thought that robots were their savior, when in reality, robots have been disappointing dreamers since da Vinci…literally!”

Munro, a longtime manufacturing consultant, says that he went through a similar recalibration of expectations with American carmakers in the 1980s and ’90s. “If Mr. Musk does what I suggested above (the robots and redesigning the body-in-white), his company will be rolling in cash in no time,” he told us. “It worked for GM.”

Munro acknowledges that with its level of on-site vertical integration—the seats are assembled nearby—Tesla will continue to need more people. There was no criticism of that strategy, which Musk sees as a strength, potentially allowing the company to adapt more easily for production ramp-up.