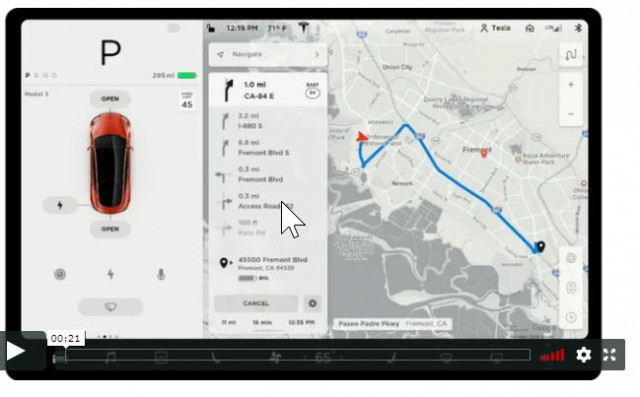 Tesla chief executive Elon Musk on Friday announced that the company released its long-awaited Version 9 software update, but without the full-self-driving features that he promised back in June.

Instead, the new software now rolling out to all Model 3‘s, Model S’s, and Model X’s makes improvements to the navigation system and the user interface.

Among those most welcome by Tesla drivers are moving the turn-by-turn directions display on the Model 3 to the left side of the car’s center screen where they’re closer to the driver’s line of sight, and information about whether the car is eligible to drive in carpool lanes on a given trip or trip segment. (Owners will also have to download new maps over wi-fi to enable the feature.)

Other new Version 9 features include a Tesla’s new built-in dash cam that records video onto a USB drive. Some users have already figured out how to modify the software to run the dash cam while the car is parked.

Tesla’s blind-spot monitors get a new, more-prominent display on cars that weren’t ordered with full-self-driving hardware. It now matches the one in cars that include full-self driving hardware, showing a red line when the driver engages the turn signal and there’s already a car in the next lane.

DON’T MISS: Tesla raises price of full self-driving option–if you wait for it to work before buying

The software also introduces a new application launcher across the bottom of the screen, which is a notable change for Model S drivers who have always had their application controls at the top.

The Model 3 also gets three new apps: a new web browser (which the Model S has long offered), a calendar app, and a new energy app that shows real-time and projected energy consumption (when a destination is set in the navigation system).

CHECK OUT: Tesla will roll out new Autopilot later this month

A new miniaturized view of the media player that leaves more room for drivers to see other important features such as the navigation screen is included.

This is not the first time that full-self-driving features have been announced and failed to appear.