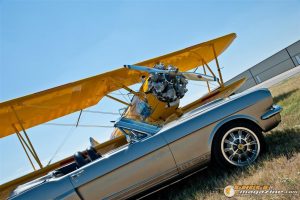 Ford Mustangs are one of the most iconic vehicles in the United States. Since its introduction back in the year 1965, Ford stated that more than ten million units of the vehicle have been sold. It continues to be a popular vehicle for those who want to drive a high-performance car. Through the years, new technologies introduced in the market enabled the manufacturers to transform this beloved vehicle into a powerful beast. The following information showcases the reasons why Ford Mustang is the best car ever.

It is fully customizable

Many accessories can be purchased online for this vehicle—from a Ford Mustang car cover to a new engine, there is an endless resource online that you can count on when looking for a specific part. The aftermarket industry for these vehicles is thriving. Many people are looking for parts that can be used to improve their vehicles. Once you customize your Ford Mustang to the style that you want, you can enter it in car shows to showcase your customization skills. With over 250 active clubs around the world, you would expect to see a car show dedicated to these vehicles. You can start searching for a club near your area and sign up for their next car show to demonstrate the features that your customized Ford Mustang has.

It has an iconic history that brings back nostalgia

Ford Mustang has been around for more than 50 years, and it continues to be one of the most successful sports cars in the vehicle manufacturing industry. It also serves as a time machine for those who want to reminisce. People who are now over fifty years old might remember driving their first Ford Mustang when they got their license, and it brings back a lot of memories. The past and the current generation all agree that this vehicle is the most suitable car to drive when going on a cross-country trip. Those who are taking a test drive want to secure their license because they are thinking of buying a Ford Mustang later on to take that road trip across the United States. Many people are stating that the historic value and the nostalgia that this vehicle provides is enough to recognize it as one of the best cars in the world.

It is affordable and suitable for people with many needs

The 2020 Ford Mustang has a starting selling price of under $27,000, and it is affordable as an American standard. Compared to other sports cars, this vehicle is cheaper, but its performance is on par with the more expensive ones on the market. The affordability of the Ford Mustang enabled middle-class people to buy it. Its price tag is one of the reasons why so many people wanted to try it out for themselves. Another advantage of driving this vehicle is that it suits everyone, no matter what their primary reasons for driving are. There is a Ford Mustangs that would be the perfect match for someone. Those who have money are even collecting Mustangs.

Ford Mustang owners across the United States have a close-knit relationship with each other. When driving one of these vehicles on the road, expect other Mustang owners to greet you. This is fairly common for motorcycle groups, but a similar behavior for car owners was not common until cars like the Mustang came to be. Another advantage when driving the Mustang is the sense of adventure that it gives. Many people who own a Mustang are saying that it is really fun to drive, and it is the perfect vehicle for a late Friday night joyride. In the present, there are more than 250 clubs dedicated to promoting this vehicle, and they are highly active, especially when joining motor shows and other similar events.

Being sold to the public for more than five decades, the Ford Mustang has a long list of signature trademarks. The running horse emblem is one of these trademarks, along with the tri-bar configuration for the tail lamps. These are all unique to the Ford Mustang making it a highly desirable car for collectors and hobbyists.