Well, don’t say that we don’t care about you all, dear readers. This is especially the case when our cars disengage their handbrakes and simply smash into inanimate objects. To get an idea of how bad the damage can be, check out the photos below from one reader. 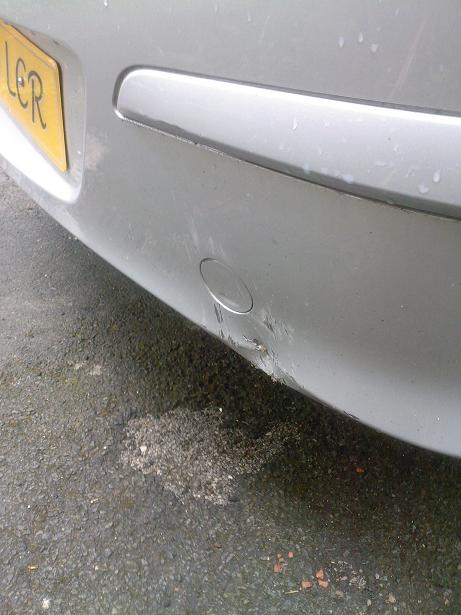 Naturally, I couldn’t just let this lie. So, I decided to find out what those at Vauxhall had to say. I didn’t get a response at first, but a little perseverance can go a long way. After a little while, I decided to take it further. To General Motor’s credit, I got a reply from Denis Chick, who is none other than the Director of Communications for GMUK (that’s the brands Hummer, Vauxhall, Saab, Cadillac, Corvette and Opel).

Here’s what he had to say:
“The Vauxhall handbrake story is well documented having been featured on Watchdog and in Which? magazine a number of times. The summary up front of the thread is rather ‘old news’ by now and contains errors.

Vectra has been dealt with as below.

On the Corsa, Watchdog informed us of every case that was brought to their attention so that we could investigate each one. They have informed us of less than 10 cases so to suggest that the Watchdog Corsa number is in triple figures is wrong. On Vectra there was a more significant number which enabled a much more detailed investigation. The consistency of the Vectra test results concluded that a service action was necessary on that model.

Attached are the statements relating to Vectra and Corsa. The Vauxhall retail network is well aware of the status on both models (clearly so on Vectra where the service action is in hand) so there is no need for a ‘stoney silence’, although again this may be historic and relating to the period before the company made the first formal statement.

On Vectra, the modification programme, which includes a new spring in the mechanism, is still underway but well through the bulk of the volume. On all Corsa investigations to date (on a relatively small number of vehicles) have found no fault with the handbrake mechanism. Long term tests are ongoing on this model.

You will note that we continue to suggest that when the vehicle is parked, along with the handbrake application, a gear should be selected.”

In reference to the Corsa handbrake statement from Watchdog, I have included this below. Bear in mind that this is only a statement of intent based on the cases that Watchdog have raised – which to my knowledge is not that many.

The Safety and Quality of Vauxhall products remains our highest priority. The action that we have taken on Vectra/Signum handbrakes demonstrates that we care about any potential issues arising with our products.
We will investigate the cases that Watchdog has raised on Corsa D.

Vauxhall also reconfirms that, at all times, when parking their vehicle on a slope, customers should continue to engage a gear when the vehicle is stationary, the handbrake is applied without depressing the release button and the engine is switched off, in line with the recommendations referenced in the owner’s manual and in the official Highway Code.
Vauxhall Motors Limited
April 2008

Let’s move on to the Vectra/Signum shall we? Once again, we have another statement. This time we’re looking at information from the Customer Satisfaction Programme. So, let’s take a look:

Following a small number of complaints of Vectra and Signum vehicles rolling away due to allegedly ineffective handbrakes, Vauxhall Motors Limited engineers, along with consultant engineers, suppliers and other bodies, have conducted rigorous technical tests on those vehicles.

Vauxhall advised customers in October 2007 that when parking their vehicle, customers should always apply the handbrake and engage a gear in line with the recommendations referenced in the owner’s manual and in the official Highway Code, especially when parking on a slope.

Vauxhall believes that the handbrake system used in the Vectra and Signum is safe, however, Vauxhall treats all matters relating to the safety of its products as its highest priority. In line with this priority and that of continuous improvement, Vauxhall has decided to implement, as a Customer Satisfaction Programme, a modification to the handbrake mechanism to reduce the possibility of a partial release when incorrectly setting the handbrake.

Owners of c250,000 manual transmission Vectra and Signum models (produced from 2002) will receive a letter from the company requesting that they contact their nearest retailer to arrange for the modification, at no cost to the customer. Vauxhall Motors Limited is launching this Customer Satisfaction Programme in agreement with the Vehicle and Operator Services Agency (VOSA), an executive agency of the Department of Transport. Note that this is not a safety recall.

Vauxhall reconfirms that, at all times, irrespective of the modification, when parking their vehicle on a slope, customers should continue to engage a gear when the vehicle is stationary, the handbrake is applied without depressing the release button and the engine is switched off, in line with the recommendations referenced in the owner’s manual and in the official Highway Code.

This Customer Satisfaction Programme will be carried out on a phased basis. Exact start timing will be based upon parts availability. Vectra and Signum owners who have concerns about their car should call Vauxhall Customer Service on 0845 090 2044 or via email at [email protected]

So there we have it. Does this mean that there are endemic problems with Vauxhall handbrakes in a number of their vehicles? Well, I don’t think that you can say that. Then again, perhaps there are enough complaints here alone for Vauxhall to take another look. Bear in mind that long term tests are ongoing, so there is still a chance for Vauxhall to hear your complaint. Please keep the comments coming in regards to this issue and I’ll provide more updates as and when we receive them.