We all know them for their involvement in some of the biggest motorsport events on the planet but it’s not all racetracks and time trials. The drivers competing in Formula One and NASCAR must get used to the cars they drive on race day, but what do they use when they have to run errands or pick up their kids from school?

Well, it typically has to be fast. Motorsport’s biggest stars must get used to the speeds they reach in their day jobs and needless to say, many of them have a private car collection befitting of their 9-5. Let’s take a look at one some of the biggest names in worldwide motorsport drive when they’re not out on the track.

He may drive for McLaren-Renault on the circuit but Fernando Alonso has a far broader private collection of cars. Alonso owns a Maserati GranCabrio, a car which houses a powerful 4.7-liter V8 engine and delivers a total of 440 horsepower. The GranCabrio is a rare thing amongst sports cars as it actually has four seats. Leg-room is a little lacking in the back but that’s not the reason you buy a Maserati. 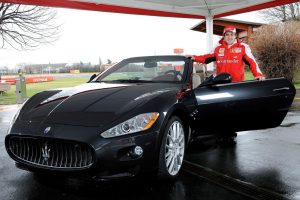 The former Ferrari F1 driver also owns a number of cars made by the famous Italian brand. Alonso bought one of just the 40 Ferrari 599s which were sold back in 2012 as well as a 458 and a Ferrari FF. Alonso is also the proud owner of a Renault Megane.

Jimmie Johnson is a seven-time champion in the NASCAR Cup Series and one of the greatest figures the sport has ever seen. He navigates the oval better than almost anyone around but he still has a life outside of the sport. Johnson was once asked in an interview what car he drove on a day-to-day basis and gave a rather surprising answer.

He later said in the same interview that a sports car would be impractical for city driving, but that if he had to drive one he’d choose a black Lamborghini due to his love of the movie Cannonball Run.

Only two men have won more Formula One Drivers’ Championships than Lewis Hamilton and he’s getting closer to that record tally with each passing season. The 33-year-old is the odds-on 1/2 favourite on Betway as of 18 July to grab his fifth career championship so it’s perhaps fitting that his private car collection is as impressive as his trophy cabinet. 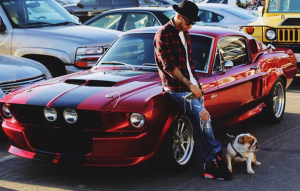 Lewis Hamilton has a quite incredible selection of cars but perhaps the pick of them all is his $2.1 million Pagani Zonda 760LH. It’s one of just 13 in the whole world and its V12 engine is capable of producing 750bhp for a car which reaches 60mph in 2.6 seconds. His collection doesn’t end there. Hamilton also drives a classic 1966 Shelby 427 Cobra, a Mercedes-AMG SLS Black Series and 1967 Ford Mustang Shelby GT500 amongst many, many others.

Only Giacomo Agostini has won more Grand Prix motorcycle race wins than Valentino Rossi. The Italian is one of the greatest the sport has ever seen with an incredible 115 race wins in a career which has spanned over 20 years and an impressive seven MotoGP World Championships.

Perhaps all that time spent on two wheels has pushed Rossi into favouring a collection of cars as he boasts an impressive personal vehicle collection. He owns a Ferrari 458 Italia as well as an orange BMW M3. The Italian bike superstar has also purchased his own private yacht with his significant career winnings.

Jenson Button’s incredibly long career in Formula One came to an end in 2017 but he has been competing in the Complete Super GT Series ever since. Button has had a quite extraordinary career and only Rubens Barrichello has entered more F1 races than him. He won the 2009 Drivers’ Championships and has earned an enormous sum of money from his exploits on the track. 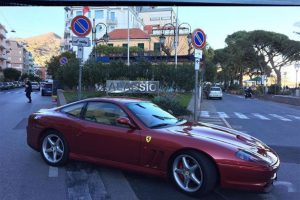